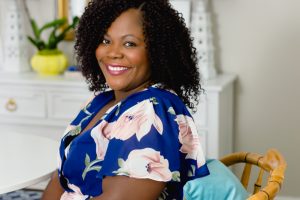 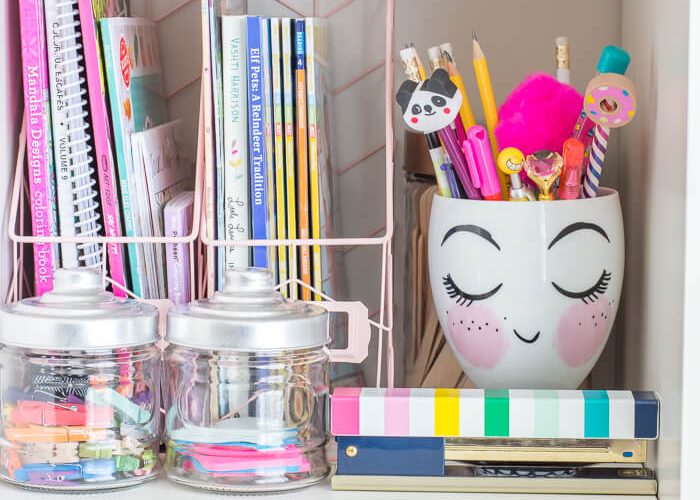 Last week I shared how to use the KonMari method for decluttering kids rooms. And while it was a bit intense the results were more than worth it.

We did, however, keep the majority of Kayla’s craft supplies though since those are the things that bring her joy {one of the tenents of the KonMari method}.

The Barbies, Legos, and stuff animals we kept pale in comparison to the sheer number of art and craft pieces that need to be organized.

Which is why we are focusing on organizing kids craft supplies this week.

Since we got rid of at least 50% of the things in Kayla’s room in week 2. We did not need a whole wall of storage anymore.

So I took out all 3 shelves she had in her room that equaled a whopping 20 cubbies to pile stuff into.

{no wonder she had some much stuff in her room!}

We moved in two shelves we had on our upstairs landing into her room. They are basically identical to the ones she had before but slightly taller.

Now she has just 10 very organized cubbies instead of 20 that’s overflowing with junk.

BTW the cubby shelf is from IKEA.

Ours is the discontinued EXPEDIT. But, their Kallax shelves basically have the same dimensions. Each cubby is roughly 13 x 13.

Now, this is the $100 room challenge after all. Therefore I wanted to keep Kyla’s crafts supplies organization very {very} budget friendly.

Here are pretty much all of Kayla’s crafts supplies that needed to be organized.

In order to have a place for everything {and everything in its place}, we needed a lot of different containers!

Initially, my plan was to use these 6-quart shoe size clear bins. But it turns out that I could only fit two in each cubby. Which would result in a lot of wasted space.

With that in mind, we headed to the Dollar Tree. Lo and behold I spotted these containers that are clearly intended for food.

But, the size was ous. Not to mention the soft orange color of the lids is something I could work with.

After driving to two Dollar Tree’s I ended up with 6 of the containers with the orange lids {$6} and 4 of the smaller version {$2}.

Once I got them home, it was {no pun intended} that they were a perfect size! Big enough for a boatload fo crayons, yet small enough to fit 6 into 1 cubby.

Now that’s a good use of space!

To make them even more functional. I removed the label that was on them and replaced it with these simple printable labels I made.

While at the Dollar Tree I also grabbed these 3 containers with the blue tops {$3}.

The only bin I did not get from the dollar store is the paint/stamps container.

I purchased the white container on sale for $5 at Michaels specifically for Kayla’s painting supplies.

It has a cool little tray insert that’s perfect for holding paint brushes and stamps.

Also in this cubby are 2 $1 magazine holders from Target’s dollars spot holding her coloring books, and small picture books.

We already had them from Kayla’s last room makeover. As well as the little vase with the face.

Another storage container I had on hand but you can also find at most Dollar Stores is this 6-quart shoe size clear bin I used for Kayla’s stickers.

On the same shelf, I used this hanging wire basket from IKEA. Although it was already in Kayla’s room it served no real purpose.

Now, it’s a dedicated spot for her electronic devices. To keep it neat, I used an old iPhone box to house her cords and charger.

Another piece that came in handy when organizing Kayla‘s arts and crafts supplies {without taking up too much space} is this six drawer lucite cubby.

I originally purchased it when I was making Jaden’s room over a few years ago.

Directly below the six drawer lucite cubby is the game changer. The IKEA KVISSLE paper sorter! It was a splurge at $20 but oh so worth it!

Kayla has SO MUCH paper and with this piece, I was able to organize it all in one cubby. With room leftover to store her extra canvases, paper bags, and tracing paper.

The best part is each compartment can be pulled out!

I really wish I had a video giddy K was when she came home from school and saw her organized shelf!

To add more functionality to her room in a pretty way I created this large DIY bulletin board!

It’s very light, inexpensive, and crazy easy to make. Read about it HERE!

I must say I was also happy to finally have all her arts and crafts supplies organized. It also made me feel bad I did not do it sooner {mamas guilt}.

Between my Dollar Store finds and using what we already had on hand. You can see that organizing kids craft supplies can be done on a budget!

I spent less than $40! Here is the cost breakdown

Now that all the decluttering and organization is done {hallelujah!!!}. We can move on to other fun projects in the room and making it pretty!

This upcoming week I’m tackling a big project, literally. I’m not sure if it will work out just yet.

So I’m keeping it a secret for now, in case it turns out to be a hot mess LOL.

Now check out what the other $100 Room Challenge participants are working on for week 3! 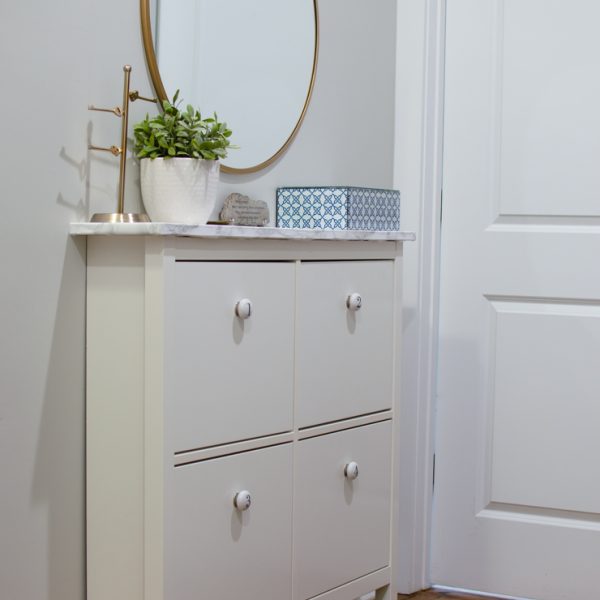 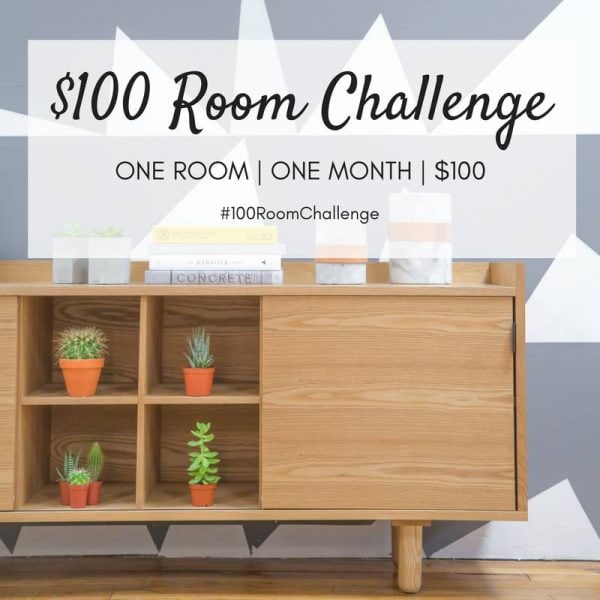 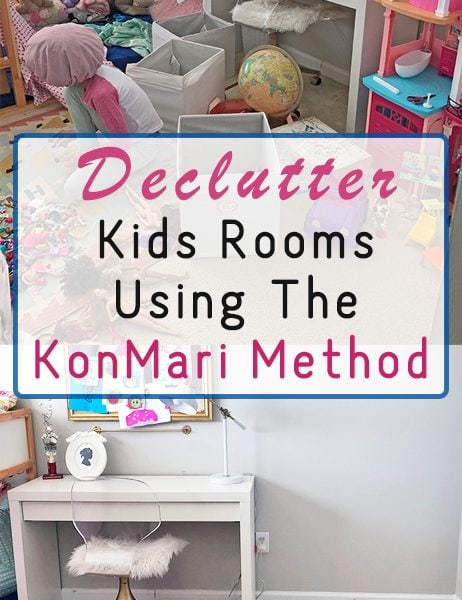